the emperor's new cloths.
this is the second biggest scam in the history of mankind.
filtered tap water costs $0.06 cents a gallon.  bottled water is totally unregulted.  if anyone wants info or a good filter call me at 410 224 4877. 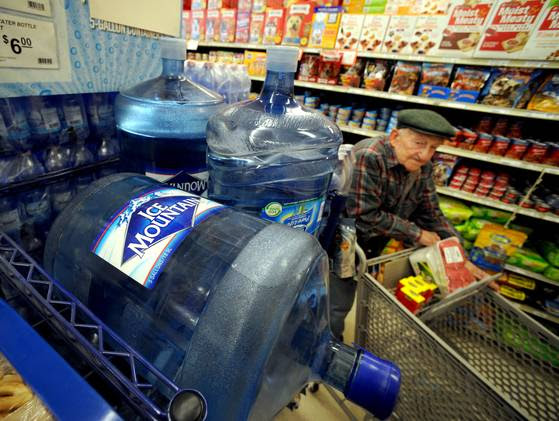 Posted by Rev. Bren Jacobson at 9:27 AM No comments:

get a water filter. make sure that it removes pesticides

http://www.examiner.com/article/are-pesticides-water-linked-to-food-allergies-new-study-released
Posted by Rev. Bren Jacobson at 12:23 PM No comments:

infertility caused by our drinking water.

this is in large part because of xenoestrogens in the drinking water supplies, which is becoming more and more prevalent.

the bbc did a report called "assault on the male" about this problem around 20 years ago.

it is a good reason to get a good water filter.
Posted by Rev. Bren Jacobson at 3:07 PM No comments:

http://www.nytimes.com/2012/11/14/us/tainted-water-in-california-farmworker-communities.html?pagewanted=all
Posted by Rev. Bren Jacobson at 7:01 PM No comments:

not surprising that 10 century old water is better than todays.

david letterman on frickin frackin.  "we're screwed"
Posted by Rev. Bren Jacobson at 11:53 AM No comments:


http://newsfeed.time.com/2012/07/19/startup-cafe-sells-tap-water-for-a-cool-2-50-plus-tax/?iid=nf-article-mostpop1
as einstein said the only thing that is infinite is stupidity.

Posted by Rev. Bren Jacobson at 9:41 AM No comments:

fricking fracking not good for health

http://www.businessweek.com/news/2012-07-09/pennsylvania-fracking-can-put-water-sources-at-risk-study-finds
Posted by Rev. Bren Jacobson at 9:14 AM No comments:

This once a day Google Alert is brought to you by Google.
Posted by Rev. Bren Jacobson at 11:55 AM No comments:

What is Rolfing exactly?

I have always wanted to get Rolfed. Have a Rolf session? Get a Rolfing treatment. I imagined it to be a treatment where the practitioner had there fingers through my ribs to the back side and vice versa. I did not know really what Rolfing was but I heard that it was painful. I am the kind of person that loves alternative medicine. I love acupuncture, chiropractic, massage and Reiki. I think there is something so fundamentally missing from our culture- connection- and these practices really help the body heal itself.
I have severe problems with my back. They are all self caused. Years of stilettos, waitressing with heavy trays, years of teaching snowboarding and the injuries that incurred,  three babies and gaining and losing 150 lbs through pregnancies.
So I decided that I would try Rolfing. I went to Body Works in Durango and met with Bridget Hendrix, a petite and lovely woman. The space was bright, immaculate and beautifully decorated. She asked me some questions about my health and had me walk around the room. I know that my posture is horrendous. Then I sat on a table that is like a massage table but larger and more comfortable and she began the treatment. I sat on the table as she worked on my colon and other organs. It was very nurturing and felt like a dance. I was instructed to let my body be moved by her hands. It was very relaxing. Then I laid on my back while she worked on different nerves and organs in my stomach area. While I lied on my back she had me work on breathing exercises that filled my whole body. It was eye opening to really see how shallow I breathe on a normal basis.
Last, she rolled me on my side and put pillows between my knees and put me in a comfortable position for my body. Then, she worked on the nerves in my neck and my sides, all the while I was breathing deeply.
When the treatment was over, I walked around the room once more, and I could feel the arches of my feet. Something I have not felt in years. I thanked Bridget and walked outside. I kept on breathing after I left the space and imagined my head being lifted by the sun like a magnificent sun flower reaching the rays. I could feel space in my upper torso, neck and hips. I felt amazing. I had to drive to Farmington, so I kept on breathing and sat up very straight, conscious of my posture, breath, and outlook.
I want to continue this journey and see where it takes me. Rolfing is a healing art that I want to learn more about.
Posted by Rev. Bren Jacobson at 12:41 PM No comments: